If you're an enthusiast of the Microsoft Office clip-art library, you may be familiar with this little fellow 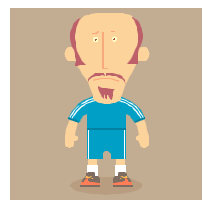 who, I'm afraid, bears an uncanny resemblance to myself.

Just to have some fun with him, I wrote a little hack that converted his native format (WMF, or Windows Metafile Format) to something a bit easier to play around with in modern environments (XAML). The conversion resulted in a bunch of Polygon elements (16.2K worth) with their Fill and Points properties set.

The next step was a Silverlight program that displayed these polygons with some draggable blue dots attached to three of the four corners:

The Polygon elements defining the image reside in a Canvas, whose RenderTransform property is set to a MatrixTransform object. By dragging the three corners, you can effectively apply an affine matrix transform to the points, resulting in translation, scaling, rotation, or skewing, perhaps like this: 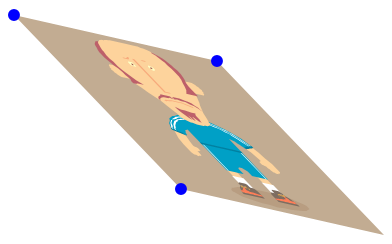 The only really tricky part of the program is the code that creates the matrix from the locations of the three dots, whose names indicate their locations, Upper-Left, Upper-Right, and Lower-Left:

The hard-coded values of 192 are the width and height of the image.

Because Silverlight (like WPF) allows only two-dimensional affine transforms, it is not possible to transform a rectangle into anything other than a parallelogram. That's why it's only possible to drag three corners: The fourth corner always goes along for the ride. The program displays the resultant matrix in the upper-right corner; the third column always contains the values 0, 0, 1, which indicates a 2D affine transform.

Here's the AffineTransformDemo source code. As usual, the only files I really messed with are Page.xaml and Page.xaml.cs, and the project includes a Dot class for the draggable dots.

You can independently drag any of the four corners and produce images that look like this:

It's a magic trick! Well, not really. The program is simply applying a non-affine transform to the polygon points before turning them over to Silverlight for rendering.

Here's the NonAffineTransformDemo source code. You'll discover a structure named MatrixNA ("matrix non-affine") that has a 9-argument constructor and 9 read-only properties named M11, M12, M13, M21, M22, M23, M31, M32, and M33. The structure overrides the multiplication operator and contains a Transform method that applies the transform to a Point.

The Page.xaml.cs file contains the math to create the MatrixNA object based on the locations of the four dragged dots. It's basically the same math I discussed in my blog entry Non-Affine Transforms in 2D?, which uses WPF 3D to simulate non-affine transforms of bitmaps.

A little experimentation with NonAffineTransformDemo will reveal that you can pull the corners into any quadrilateral, but only if the quadrilateral is convex will the non-affine transform be correct. Otherwise, stuff in the interior of the image pops outside. While this might be amusing, it's not usually desired, and a real program would probably want to restrict mouse movement so the destination quadrilaterial is always convex.

I originally wanted to define the Polygons property in the NonAffinePolygonTransformer class to be of type PresentationFrameworkCollection<Polygon>. This class seems to play a role in Silverlight similar to the FreezableCollection<T> class in WPF, in that it provides change notifications if items in the collection change. Although PresentationFrameworkCollection<T> is widely used in Silverlight, it has no public constructor and is apparently entirely off-limits to Silverlight application programmer peons like myself.

I instead made the property of type List<Polygon>, and I created an instance of this collection in the NonAffinePolygonTransform constructor, but obviously my class doesn't receive a change notification when the collection is actually filled, which meant that the class didn't display an initial set of transformed polygons. I had to "fix" this problem by making the Matrix property of type MatrixNA? rather than MatrixNA, so that the Matrix property would fire a property-change notification when the property is initially set to a non-null value from Page.xaml.cs.