During the week in September that I was attending the Microsoft Build conference and learning all about Windows 8, only one topic made me gloomy: This was the Windows 8 implemention of the Manipulation events. These events provide a high-level application programming interface to touch input, so obviously they are very important.

I first became acquainted with the Manipulation events when they were implemented in the Windows Presentation Foundation 4.0. I wrote about them in not one, not two, but three articles for MSDN Magazine. I liked the WPF versions very much because they consolidated the activity of multiple fingers into matrix transforms, which seemed to me both conceptually proper and technically straightforward.

But when the Manipulation events were moved to Windows Phone 7, they were stripped down quite significantly, and in the process they lost these matrix transforms. At first glance it seemed as if the transforms could be recreated from the information provided by these events, but it turned out to be rather awkward, and surely not what was intended.

I am not the only Windows Phone programmer who instead glommed onto the Gesture interface to multi-touch, which isn't even part of the Windows Phone API. This interface became available in the Windows Phone Toolkit downloadable from CodePlex, and internally it was implemented using the Windows Phone XNA touch interface. I found these Gesture events to be much easier to use than the Manipulation events and I wrote about them with much enthusiasm for MSDN Magazine.

But I am by nature an optimist, and perhaps something will change before the beta release of Windows 8, or perhaps I'll come up with a good fix that I can easily plug into any Windows 8 program. Meanwhile, let's take this opportunity to explore the Windows 8 Manipulation events in the context of the other touch events. Even despite this flaw, these events are important for working with touch input, and touch is an increasingly important part of modern computing.

A Windows 8 Metro-style application written in C# uses a programming interface called the Windows Runtime (WinRT). This API does not define mouse or stylus events. Instead, mouse and stylus input has been consolidated with touch input into composite events. You can work with mouse and touch input without knowing the origin of the input, or you can determine where the input came from if you want.

All the consolidated input events are defined by the UIElement class, and they can be roughly divided into three sets of interfaces:

Virtual On methods of all these events are defined by the Control class.

To get a grasp on the various touch interfaces in Windows and how they interact, I wrote a little program that attempts to display some (but not all) of the information available from these events. You can download the ManipulationTracker project and compile and run it on your own Windows 8 machine. 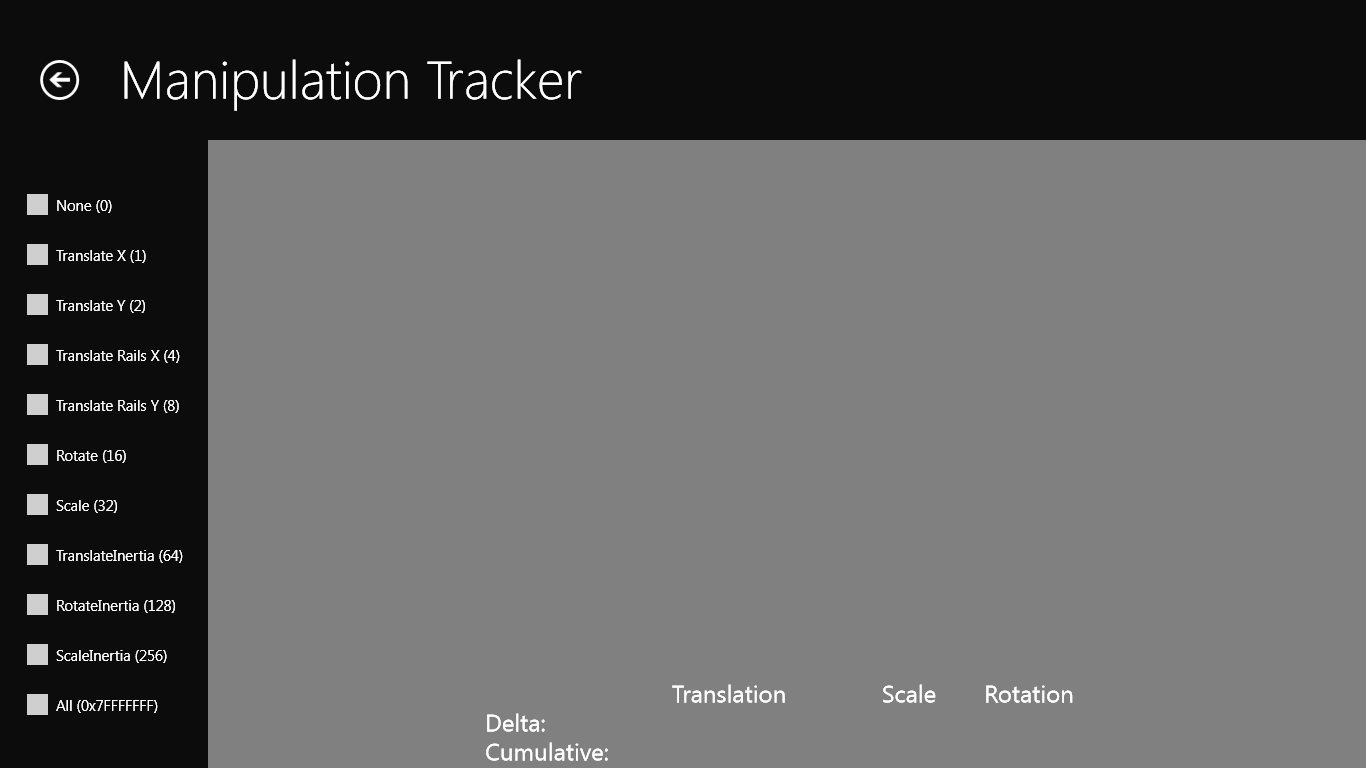 The PointerEventArgs that accompanies these event has a GetCurrentPoint method that returns a Point relative to a particular element, and a GetIntermediatePoints method I haven't played with yet. There's also a Pointer property that supplies PointerDeviceType information (Touch, Pen, or Mouse) and a PointerId of type uint. This latter property lets a program track multiple fingers, or fingers in combination with mouse and stylus input. There is a unique ID for each pointer currently touching the screen, be it human or rodent.

The circles are semi-transparent so you can still see them when they overlap: 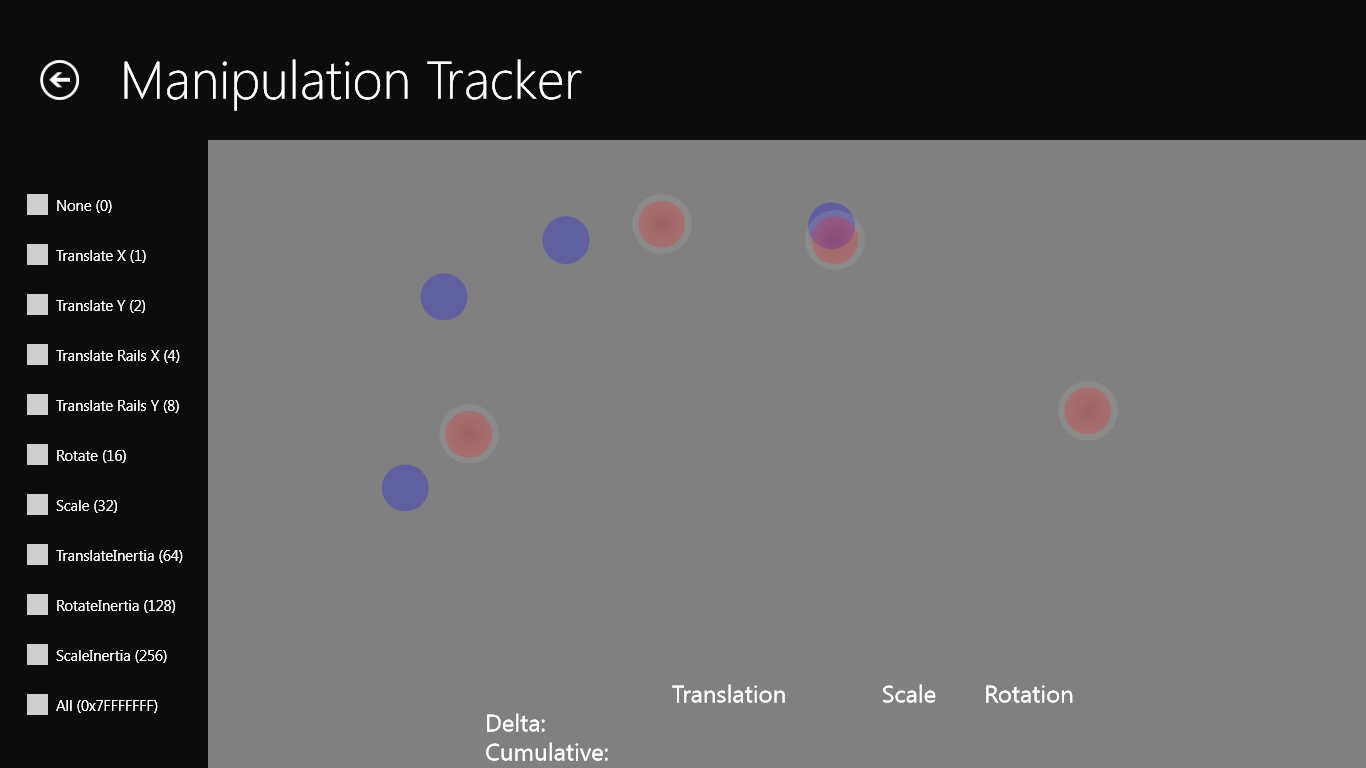 Note the gray halos around the red circles: Those are provided by Windows 8.

In one sense, your program doesn't need to go beyond the Pointer events. They provide all the information your program needs about mouse, stylus, and touch input, and you can use them to derive taps, holds, and pinches on your own. But it's certainly more convenient to use the other events defined by UIElement.

By default, the IsTapEnabled, IsDoubleTapEnabled, IsRightTapEnabled, and IsHoldingEnabled properties defined by UIElement are all set to true. These correspond to the Tapped, DoubleTapped, RightTapped, and Holding events. (No, the RightTapped event isn't generated by a finger on your right hand: It's mostly used to register right-button clicks on the mouse, but you'll see shortly how it can be generated by touch.)

On receipt of a Tapped, DoubleTapped, or RightTapped event, the ManipulationTracker program flashes the name of the event at the right side of the screen with a line pointing to the location where the event occurred. (It's an animation that fades away after half a second.) As you might expect, a DoubleTapped event is always preceded by a Tapped event: 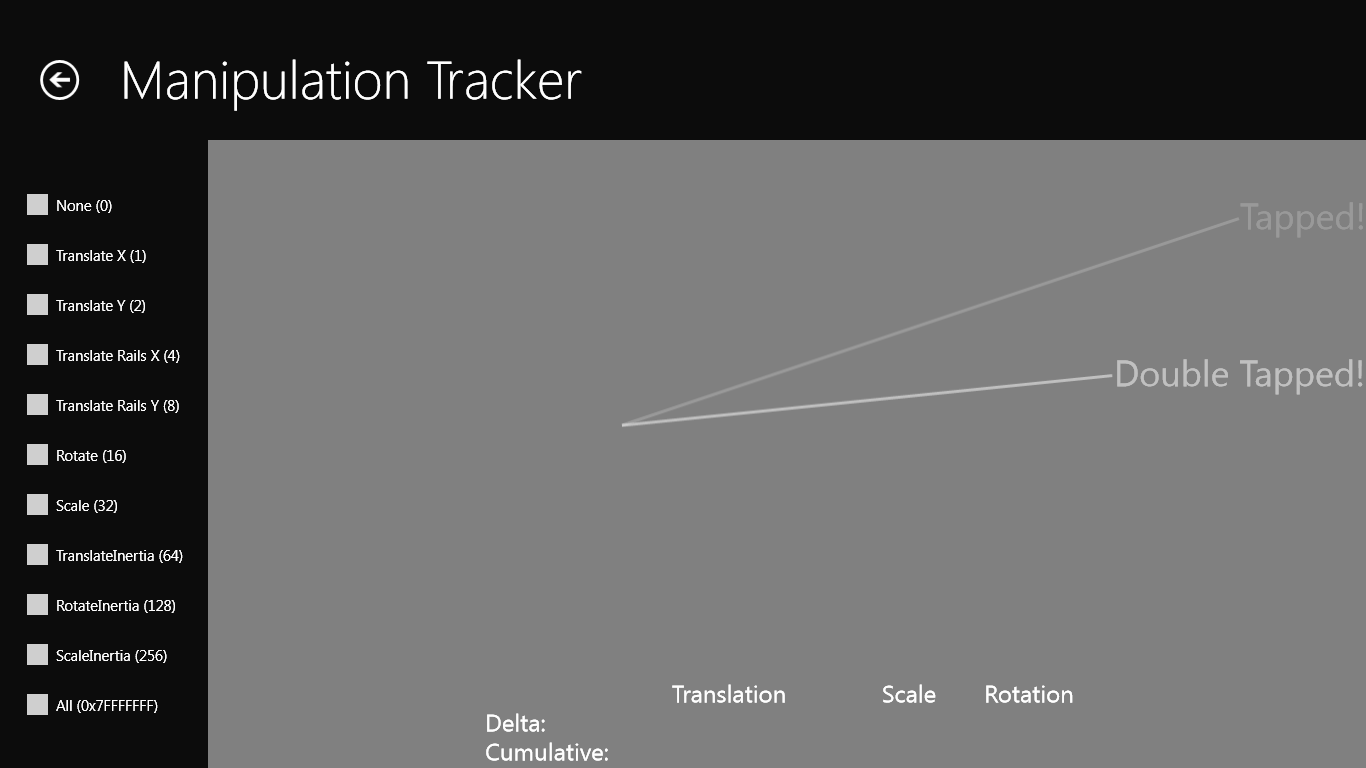 With the Tapped, DoubleTapped, and RightTapped events, the finger is always lifted from the screen (or the mouse button released) when the event occurs. The Holding event is a little different from the others, because this event occurs when the user is still touching the screen. The finger must remain in contact with the screen without moving (or not moving much) for a particular period of time.

(These tap and hold events and the Manipulation events are generated by the GestureRecognizer class and related classes defined in the Windows.UI.Input namespace. I suspect that somewhere in one of these classes, time and movement thresholds are defined to generate these events, but I have not been able to find public definitions or determine if they can be changed on an application basis.)

The ManipulationTracker program displays the word "Holding" for Started, fades it out for Completed, but fades it out in red for Cancelled. You can experiment with the program to see how these work.

Now try it again. Touch the screen and hold. A Holding event with HoldingState.Started is generated. Now with your finger still touching the screen, move it a bit. By my reading of the documentation, I think we should see a Holding event with HoldingState.Cancelled, but instead I get HoldingState.Completed. Regardless, no RightTapped event occurs in this case. If the ManipulationMode property is set to enable Manipulation events, these events will then commence.

Holding gestures are generally used in a couple different ways. Sometimes the hold evokes a popup context menu when the finger is released. In this case, you can probably ignore the Holding event entirely and just handle the RightTapped event. Or, you might want your program to go into a special mode, but for those cases you might want to focus instead on using the Manipulation events.

The Manipulation events are intended to consolidate the activity of one or more fingers into the common graphical operations of translation, isotropic scaling, and rotation. One-finger rotation around a pivot point is supported. Inertia is supported. "Rails" are supported where an initial movement indicates whether the user is moving a finger horizontally or vertically, and then future input is restricted to that axis.

How to actually use the Manipulation events and their myriad features are topics that I'll cover in future blog entries and/or articles. For now, I just want to point out the major forms of information you can obtain, and what's missing from the mix.

When only the mouse or one finger is involved, it's crucial to understand that a manipulation operation begins only if the mouse button has been pressed or the finger has been on the screen an appreciable period of time (so it doesn't count as a tap) and has moved (so it doesn't count as a hold). Thus, the manipulation operation has a built-in delay from the time the user first presses the mouse button or touches the screen.

Touch one finger to the display and move it. 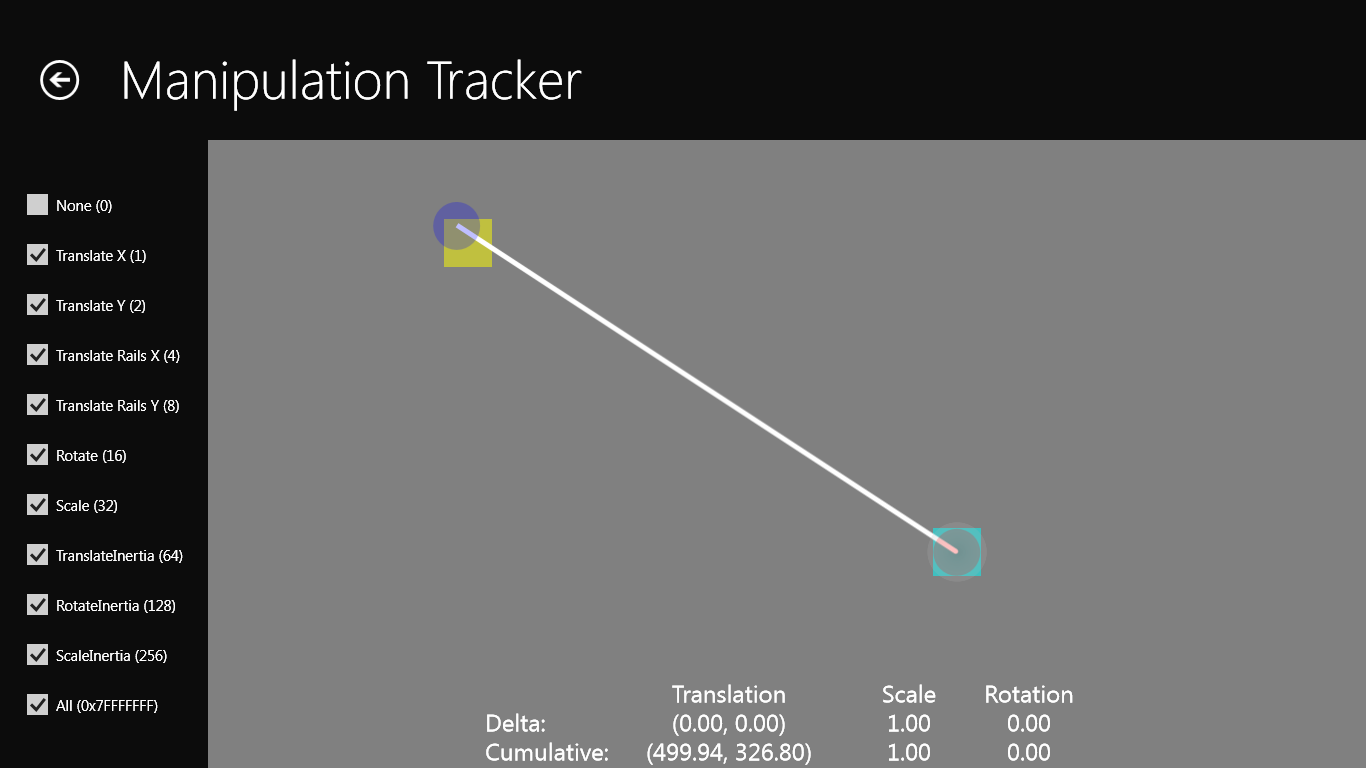 Now put two fingers down on the screen simultaneously (or nearly so), and move them: 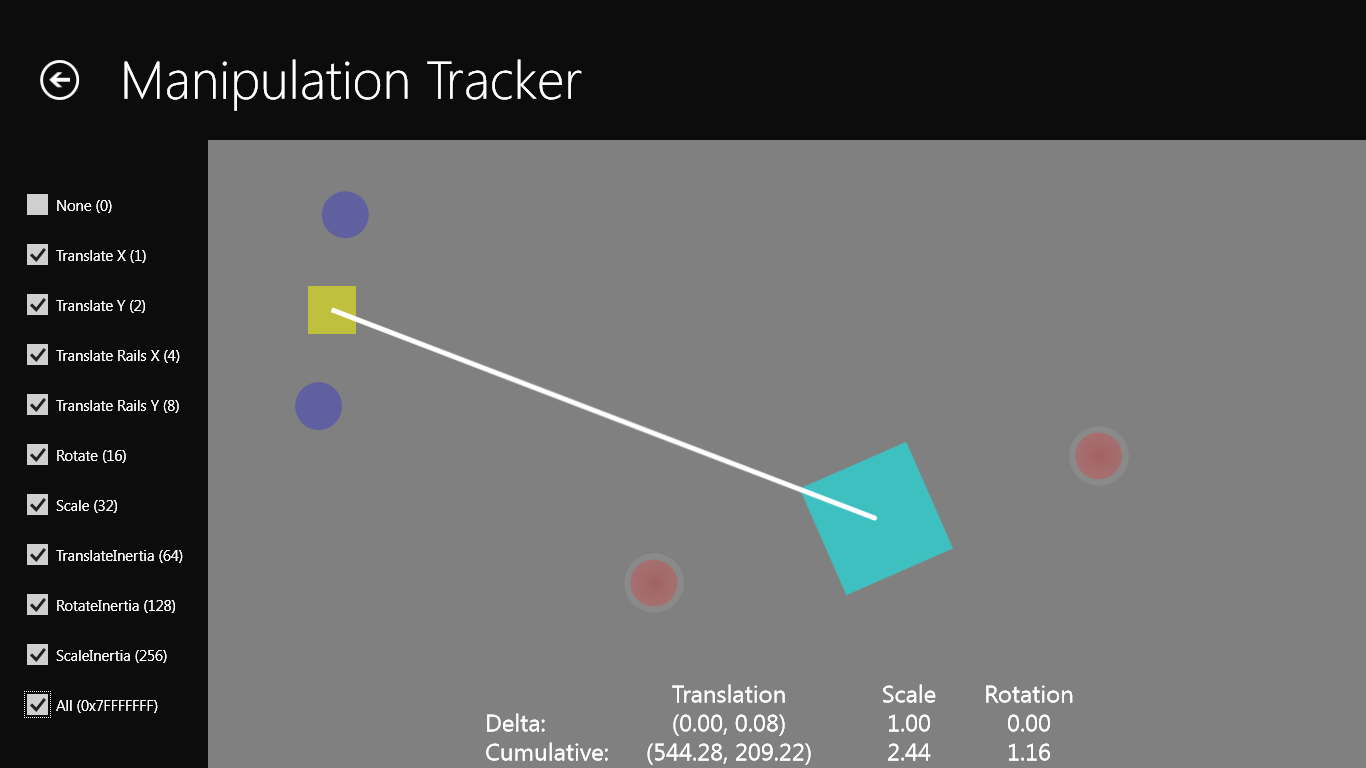 As far as PointerPressed events go, two fingers cannot hit the screen at the same time. One has to be first, and the other has to be second. But that second finger indicates that we're no longer dealing with a possible tap or hold. The manipulation can begin right away. In the ManipulationStarted event, the ManipulationOrigin point is the average of those two finger positions, and that's now the origin of the Translation vector.

Now put one finger down, start moving it, and then drop another finger to the screen and continue moving both: 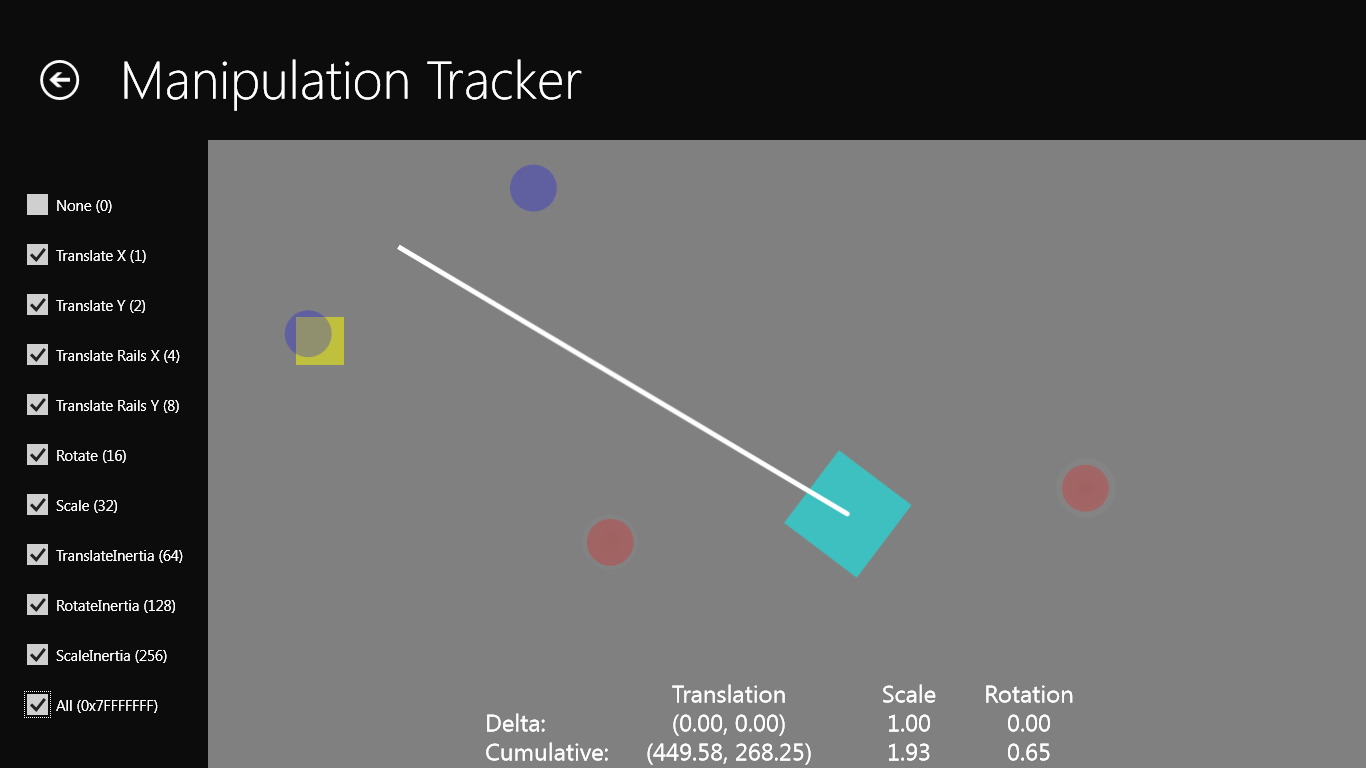 Here the initial ManipulationOrigin is slightly offset from the first finger, as was the case with the single finger. The ManipulationOrigin during the later ManipulationDelta events is the average of the two fingers, so the Translation vector seems to be unanchored, but that's OK because it's just a vector and how no real position in space.

I've written this program to scale and rotate that moving cyan square to illustrate the cumulative Scale and Rotation factors, but the only reason this seems to work reasonably well is because that square is created in XAML like this:

This and other topics I'll discuss in future installments.